Once finding out they’re positive, many people think that their sex lives are going to be turned upside down or even stop completely. That doesn’t have to happen. But you are going to have to deal with the fact that you’ve got HIV whenever you’re in a sexual situation.

No matter what the context—whether you’re about to trick with someone or if you’re thinking you might have met you’re life partner, it’s a good thing to be able to navigate the situation with more freedom and less anxiety.

One thing many people who are positive say is that the more comfortable they are with being positive, the less they worry about what other people think of them and of being turned down sexually.

For many people, it’s not easy to start the conversation. Some people rely on non-verbal ways to do it. Others assume that no mention of status as all is actually a way of disclosing. But, most people say that the best way is to be direct.

There’s not one phrase or expression that works in every situation. And, you’ll have to decide for yourself what’s the least awkward time and place to initiate the conversation—in the bar, in bed, online? Here are a few examples of what some people have said in different situations:

The other person’s reaction 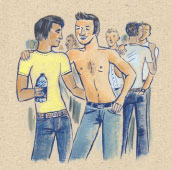 People can react to discussions of each other’s HIV status in all kinds of ways. They could get uncomfortable and not know what to do or say. They might not know how to deal with you if they realize that you have a different HIV status than they do. They may get very uneasy with your asking them to share their HIV status with you. Or, they could let you know its not even an issue for them.

The point is that their reactions are out of your control. Try not to be surprised and give them time to think about what you’re telling them and asking them. Remember, it’s a complicated sexual world out there. Try as much as possible to be prepared for being told ‘thanks but no thanks.’ It’s never easy to be rejected; it’s human nature to take it personally, especially when it’s because of something as personal as your HIV status.

Other people I may want to tell that I’m positive

Some people don’t tell their friends and families at all because they don’t want them to worry or they’re afraid of being rejected. But by not telling, you could be cheating yourself out of an important source of love and support. 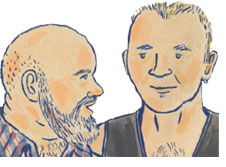 People you work with

The main thing to know about HIV in the workplace is that you’re entitled to protections under federal law. you can’t lose your job just because you have HIV. Some people choose to tell their supervisor because they’ll need time off for doctor’s appointments or other health reasons, while others feel that it isn’t necessary. Some people who are positive have chosen to tell a workmate that they’re close to, as it never hurts to have a supportive friend in a place where you spend so much of your time.

People you live with

Roommates can see you at your most vulnerable. So, even if you’re not close, you might ask yourself if it will stress you out more not to disclose your status to your roommates than it would to let them know what’s going on.

Help with telling others

You may be thinking about telling people you had unprotected sex with before you knew you were positive. You might also want to tell some people you had 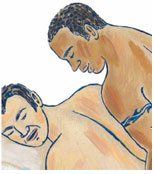 unprotected sex with after you tested positive who you didn’t tell either because you were really into them, you were wasted, or because it never came up.

Telling sex partners after the fact is not the easiest way to disclose. but, it’s possible you could find yourself in that situation. You might want to ask them if they’re already positive. If they’re not, you might be able to help and support them through the process of getting tested.

Here are few services in San Francisco that can help you let people know your status, either with assistance, with guidance, or anonymously:

Through this service offered at City Clinic, trained health workers notify your partners regarding their possible exposure to HIV infection without ever identifying you. If you’re interested in finding out more about this service, call 415-554-9085.

An Internet service to notify your sexual partners online that they may have been exposed to HIV or and STD. It’s free and anonymous. Or use STD home tests kits. No information is reported to any government or private agency. Find INSPOT at http://inspot.org

Francis Salmeri, a licensed marriage and family therapist with AIDS Health Project, can assist you with telling the people that you’ve been with, so that they can get tested for HIV. Francis has been part of AHP’s HIV counseling and testing team for the past 20 years, and has wide experience helping people to communicate with others about HIV. Your meeting with Francis will be casual comfortable, and completely confidential. Contact Francis at 415-502-8378, or visit AHP’s website at http://ucsf-ahp.org

The information provided above borrowed from “To Tell or Not To Tell – To Ask or Not To Ask” brochure, developed as part of the The Disclosure Initiative, funded by the San Francisco Department of Public Health, HIV Prevention Section.