Anonymous testing refers to services in which personal identifiers are not recorded nor associated with the counseling or test results.  Written results cannot be provided under

any circumstances. Positive results are not reported to the health department. Clients who test positive and wish to enter into medical care will eventually need to be retested with a confidential test to demonstrate proof of HIV positive status.

Confidential testing refers to services in which the person testing for HIV provides their name and other identifying information at the test site. Positive results are reported to the San Francisco Department of Public Health in accordance with state names reporting requirements. The strictest standards are in place to ensure confidentiality of this information. One of the major benefits of confidential testing is the ability to directly link test clients to medical care and other support services because identifying information has already been collected. Written results can be provided to a client if requested. It is also possible to follow up with the client at a later date if they wish, because a medical chart can be started at the time of the first test.

that sits in the mouth for about four minutes, then is sent to an off-site lab for processing). With conventional testing, a specimen is collected at the test site and then sent to another lab for testing. Results are available in one to two weeks, and are disclosed in person at another appointment.

In San Francisco, we have a network of providers who offer what we refer to as HIV CTL Services. This means that instead of just providing an HIV test and sending you out the door, this sites have trained counselors who talk with you one-on-one at the time of the test (counseling), collect the specimen (testing), provide the results to you, and help link you to any other services that you would like (linkages). This comprehensive type of HIV testing service follows all the guidelines set forth by the California State Office of AIDS and is an effective form of HIV prevention in San Francisco.

HIV antibody testing is the most common form of HIV testing in public settings in San Francisco. These tests come in various forms but are looking for the antibodies to HIV, not for the virus itself.  Antibodie sare easier to find and can be detected quickly, but there is a window period for the test. This means that once an individual is infected with HIV, his or her HIV antibody test results will remain negative for a window of time

until enough antibodies have developed in the body for the test to become positive. The window period for current HIV antibody tests in use in San Francisco ranges from two weeks to six months depending on the test and the immune system of the person testing. Most people will have developed antibodies within twelve weeks.

All individuals receiving HIV CTL services in San Francisco must provide informed consent before a test will be conducted. In all agencies that are part of the HIV CTL Network in San Francisco, written consent is required.  To provide truly informed consent, an individual must understand what test they are receiving, how long it will take to receive their result, the meaning of a negative test result, the meaning of a positive test result and any next steps that will be required, and the benefits and consequences of testing with the type of test used at that site. If someone does not feel that their questions are being adequately answered prior to testing, they should decline to test at that site.

Rapid testing refers to HIV antibody testing using either a fingerstick or oral fluid (quick swab of the top and bottom gums).  With rapid testing, a specimen is collected at the start of the test session and then the test develops in 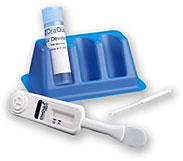 another room. This test takes twenty minutes to develop a result, and normally the client sits and talks with the counselor during that twenty minute timeframe.

Results are available after those twenty minutes, and are disclosed by the same counselor. If the result is reactive, it is what is called preliminary positive and at that point blood must be drawn to send to an off-site lab and confirm the result. If the initial rapid test was done with oral fluid, the test will also be repeated with a fingerstick sample at the time the blood is drawn for confirmation.

RNA testing is another form of HIV testing that looks for the virus, instead of antibodies to the virus. For this reason, the window period is mush shorter (the test will be positive two to four weeks after infection with HIV). This is a more elaborate and expensive test,

so results take up to two weeks. Currently, this test is available through City Clinic, although more sites in San Francisco will be offering this testing option in the future.

Except in the case of court-mandated testing, all HIV CTL services in San Francisco are completely voluntary. Clients have the right to decline CTL services at any time during the process, including during initiation of the HIV test, testing/specimen collection, pre-or post-test counseling, or referral services. A test will not be provided if the test counselor determines that the client is not there for testing under his or her own free will.